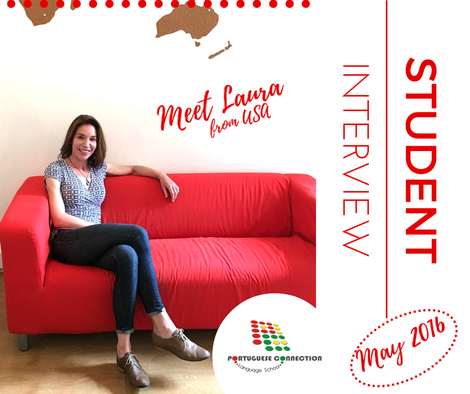 Laura has lived in many places, but luckily decided to settle in our beloved Lisbon - luckily for us, as we had the good fortune to meet her and teach her Portuguese!

Our charming interviewee is from the States and describes herself as geeky. Actually, the first adjective that came to our minds when thinking of her was ‘classy'! A classy, geeky airline pilot passionate about medieval art history. It’s not every day you meet someone like this, is it?

She was born in New York and raised in Connecticut and Massachusetts. She then moved to Montreal to study for her B.A. in art history and then to London to get her M.A., specializing in Early Christian and Byzantine art. After five years in London, she moved to San Francisco, where she rediscovered an old passion: flying. As a child, Laura couldn’t forget her first flight. Her parents realized this after a trip to Disney World: forget the attractions, forget Cinderella Castle, forget meeting Mickey Mouse: all Laura could talk about was the flight from Boston to Orlando! And if there’s something we know about Laura, it's that no one can stop her when she sets herself a goal, whether learning a new language or learning how to fly a plane. And so it does not surprise us that, with all the hours required to earn various certificates (licenses) and gain flying experience, she succeeded in becoming an airline pilot!

After a few years in sunny California, one day she and her husband got a wedding invitation from two friends, who were getting married in Portugal. To this day, she remembers being impressed with the beauty of Sintra, Obidos, Coimbra, Batalha and Alcobaça, but at the time, Laura had no idea that Portugal, some years later, would become her home country.

What she loves most about Lisbon is the fact that it’s a big small city. Big and small? Is that possible? Yes indeed. Laura says that Lisbon is a European capital with a great variety of cultural events, art exhibitions and a lot more, yet remains a peaceful and relatively small town where you can easily go out for a relaxing walk and where people are not too stressed. And, as a lover of medieval art, she could not resist the opportunity to live near the Museu de Arte Antiga, whose collection includes painting, sculpture, drawings and a lot more from the Middle Ages to the early 19th century.

We asked her about her favorite word in Portuguese and only after reading again our notes about this interview, we realized how adorable the word she picked is. She loves the sound of the word “pássaro” (bird). Kind of funny for someone who has dreamt about flying for so long. She couldn’t pick a better word! :)

Meet Laura, one of the most determined student we have ever had! She wants to become fluent in Portuguese and we can tell you that she is on the right path!

I absolutely love learning languages; in fact, at one time I had intended to make that my major at university. Living now in Lisbon, I feel fortunate to have the opportunity to spend lots of time concentrating on learning this beautiful language (which was new to me when I moved here). Researching language schools ahead of time, I didn’t know which one to choose, but once I visited the school in person, I knew Portuguese Connection would be the right place for me. I think the best part is the warm, personal environment of the school - I completely agree with my classmate Cristina that it feels like a family. Not only does this make going to classes lots of fun, it also offers the ideal environment in which to learn.

2. What do you think of Lisbon? Is Portugal very different from your home country?

Lisbon is charming and picturesque (and speaking as an amateur photographer, I would not be the first to say that the light, especially in the neighborhoods near the river, is jaw-droppingly gorgeous), but yet also vibrant and full of creativity. As a European capital, Lisbon offers a huge variety of cultural options, yet the size of the city and the pace of life here are still on a human scale. In some ways, with its combination of resplendent architecture, quirky street art and grand history, the city that reminds me the most of Lisbon is Buenos Aires. But there are also some similarities with San Francisco, near where I lived until last year; for example, the hills, the trams, and of course the bridge! (A few of my friends thought some of my photos of Lisbon were actually of San Francisco!) But there are differences, too; here, not as many places are built around cars (which I think is a good thing), and in general, the priorities in life are shifted somewhat (which I also appreciate).

3. Tell us about your life here. What do you do in your free time?

Obviously, living in a place permanently is not the same as being a tourist, so in the first couple of months there were various official details to handle (I’m happy to say that I use the “crutch” of English less and less in my day-to-day life, thanks to my classes at Portuguese Connection!). Now that my to-do list from moving here is dwindling, I plan to make more regular visits to the Museu Nacional de Arte Antiga, which is just a few minutes’ walk from my house, as well as other museums such as the Museu do Oriente, the Museu do Aljube - Resistência e Liberdade (which chronicles the rise of fascism in Portugal and the subsequent struggle for freedom and democracy), the Museu da Farmácia, which I walk by quite often on my way home from school, and the industrial-chic Museu da Electricidade. I also enjoy discovering my new city on foot, and recently, starting to explore the rest of Portugal in my car, a Mini Cooper, that I had shipped from the USA (it still has its California license plates, which has garnered more than a few double-takes!).

4. How long have you been studying at Portuguese Connection? Which course are you attending?

The first week I was here was the first week of February, and then I came back for another week later that month. Since then I’ve been taking classes off and on (mostly on!), always in the Intensive Group Classes for four hours each weekday. Having started at level A1.2, I have now advanced to level B1.

5. What do you think of your classes?

I’ve been so impressed with all the teachers at Portuguese Connection, and with the ease with which they incorporate all the various aspects of language learning into each week’s class. From day one I was so encouraged at being able to understand what the teachers were saying (not every person on the street knows how to talk to new learners in a clear and simple way!), and I always feel supported in going as far as I can, whether in conversation in class, going through homework exercises, or trying to write an essay about a visit to a museum exhibit. I think the class size is great, too - just enough students to get a good discussion going, not so big that anyone gets lost.

6. Did you learn anything that you didn’t expect to learn?

One thing I’ve been amazed by is the number of things one can do at a Multibanco! I had no idea before I moved here that the ATM system in Portugal is one of the most advanced in the world. Not only can I get cash and pay bills, but also make inter-bank transfers, pay income taxes and social security contributions, buy concert tickets, and even activate my Via Verde transponder (also a Portuguese invention, as I learned).

7. Would you recommend Portuguese Connection?

Absolutely, wholeheartedly and unreservedly. In fact, I already have done so! I can’t imagine who wouldn’t love to spend time in such a gorgeous city (and by the way, in perhaps Lisbon’s chicest neighborhood), learning a beautiful language while meeting interesting people from all over the world.