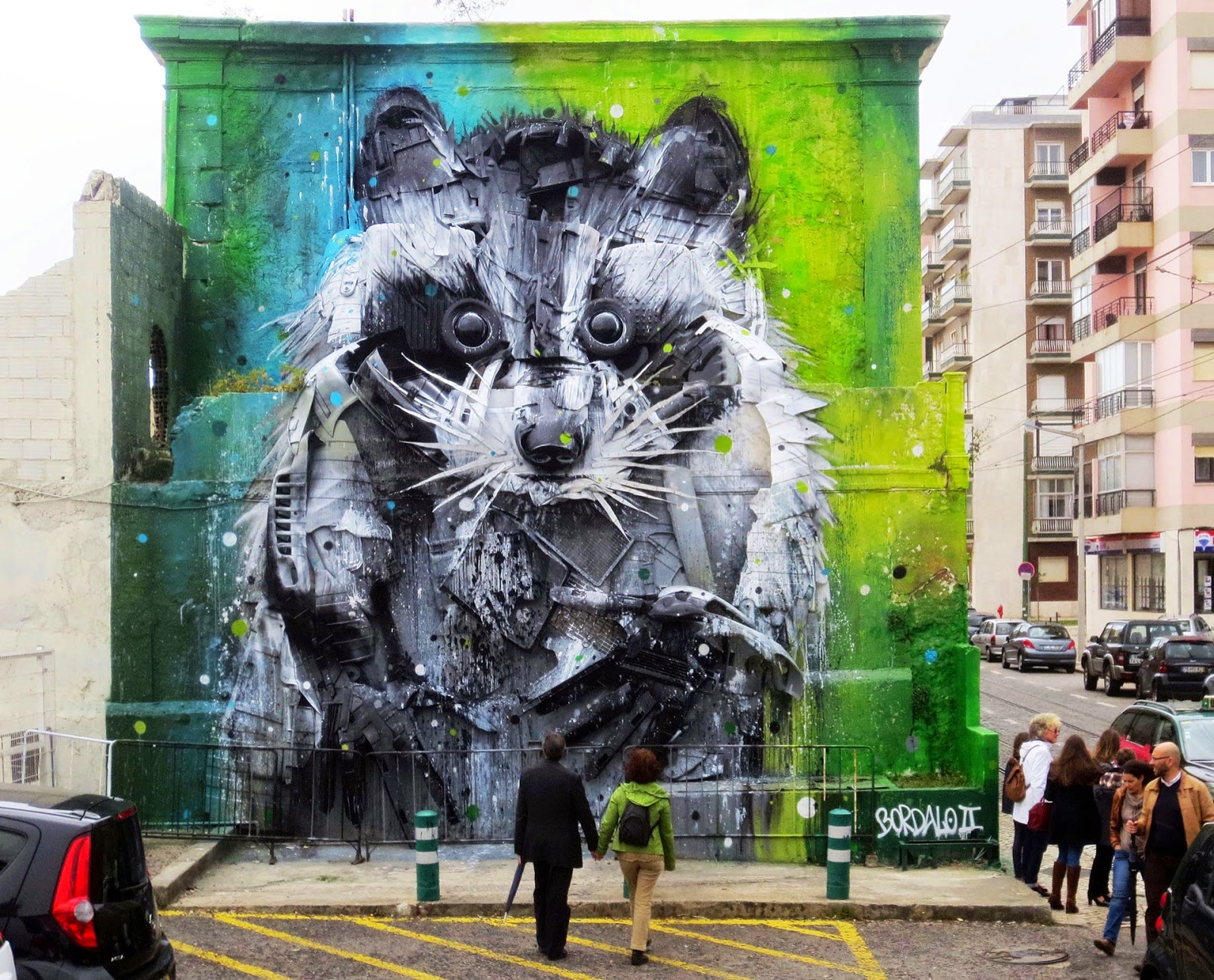 If you’re planning to come learn Portuguese in Portugal and you don’t know this before you arrive here, you’ll find out right away: Lisbon has great street art. The Portuguese capital has become one of the best places in the world to see a great variety of eye-popping pieces of urban art. Fans of the genre will already know the names of some of Portugal’s most famous street artists, such as Vhils (Alexandre Farto), André Saraiva, and Bordalo II, but there is work here by a great variety of Portuguese and international artists.  Walk around Lisbon, even for an afternoon, and you’ll realise that this elegant city is also a veritable open-air art gallery. It wasn’t always this way, however. Actually, until the 18th century, the tradition was to have all-white buildings, not the array of pastels that characterise today’s Lisbon. It was only with the rebuilding of the city after the earthquake of 1755 that wealthier areas began to incorporate colour into walls and pavements. After the Carnation Revolution of 1974, in which the decades-long dictatorship was ousted, there was an outpouring of self-expression and creativity in the form of political murals and tags on buildings around the city. After all, whether we call it graffiti or street art, this type of artistic expression was born from an attitude of transgression and challenge to authority. 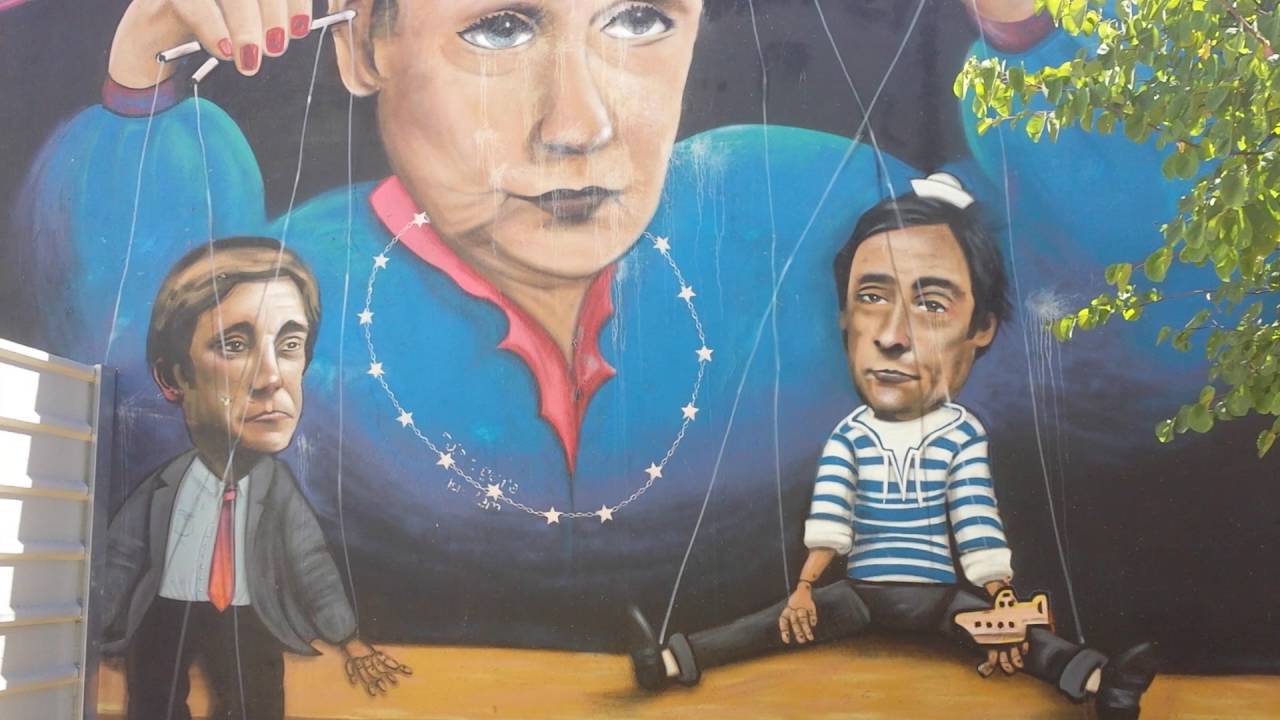 The ‘Wall of Fame’ in Amoreiras is Lisbon’s largest and oldest stretch of mural, with some work still there from the 1990s (which, in street art terms, is practically ancient). In part, the concept seen there, of providing a specific space designated for urban art, was a response to the idea that street art, or graffiti, is unwelcome where it is not expected. And it’s true that many people do see ‘tagging’-style graffiti differently from more deliberate compositions, whether by a known artist or an anonymous painter. But Lisbon’s City Hall decided several years ago that it was more productive to work *with* artists rather than against them, and saw the possibilities for community rejuvenation that public art represents. Because of this, city leaders now work with former vandals and art school professionals to create programs of large colourful murals all over the city. Nowadays, there is even a street art division of the government’s department of Heritage, and the city sponsors artists from all over the world to come create murals, either individually or as part of larger events. The GAU (Galeria de Arte Urbana), founded in 2008 on Calçada da Glória, was a City Hall-sponsored project designed to give street artists a legal space in which to operate, and in the process help regenerate the nearby Bairro Alto neighbourhood. 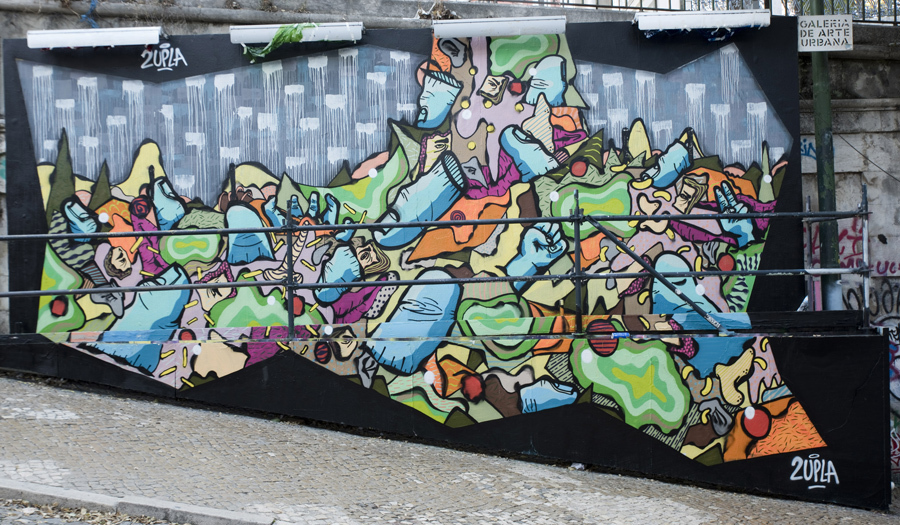 Later, in 2010, the CRONO project was a street art milestone in Lisbon, as curators Pedro Soares Neves (who is a consultant to City Hall), Angelo Milano and street artist Vhils co-curated a series of urban murals on a highly visible, centrally-located block of abandoned Art Nouveau buildings on Avenida Fontes Pereira de Melo, in Picoas. The purpose was to create public art instead of turning the buildings over to property developers, and with striking pieces by the Italian BLU, the Brazilian Os Gemeos and the Spanish 2-D SAM3, the project instantly boosted Lisbon’s profile among street art aficionados. 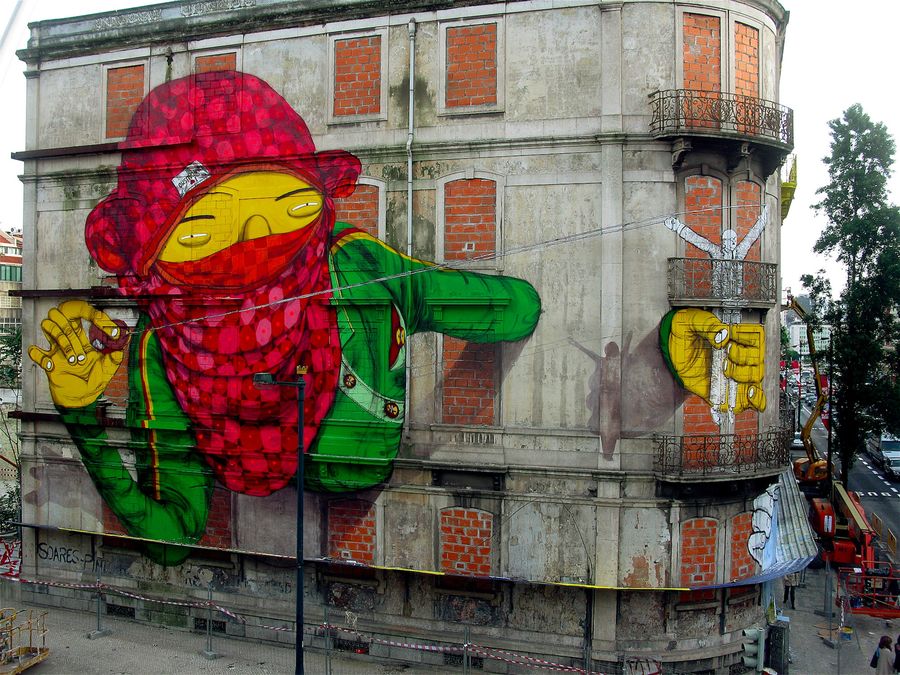 In 2016, the urban art festival “Muro - Festival de Arte Urbana de Lisboa” had its inaugural year; that year, in the Padre Cruz neighbourhood, and in 2017, in the Marvila neighborhood, the work of Portuguese and international artists changed the face of some of the most disadvantaged areas of Lisbon. These festivals featured, besides the chance to see famous artists at work, conferences, cinema, workshops, music, guided tours and street performance, and as one newspaper put it, the resulting murals ‘changed the face of the biggest social-housing areas of Europe’. Marcelo Rebelo de Sousa, the President of the Portuguese Republic, paid a visit to Padre Cruz and even helped some children paint a community mural. 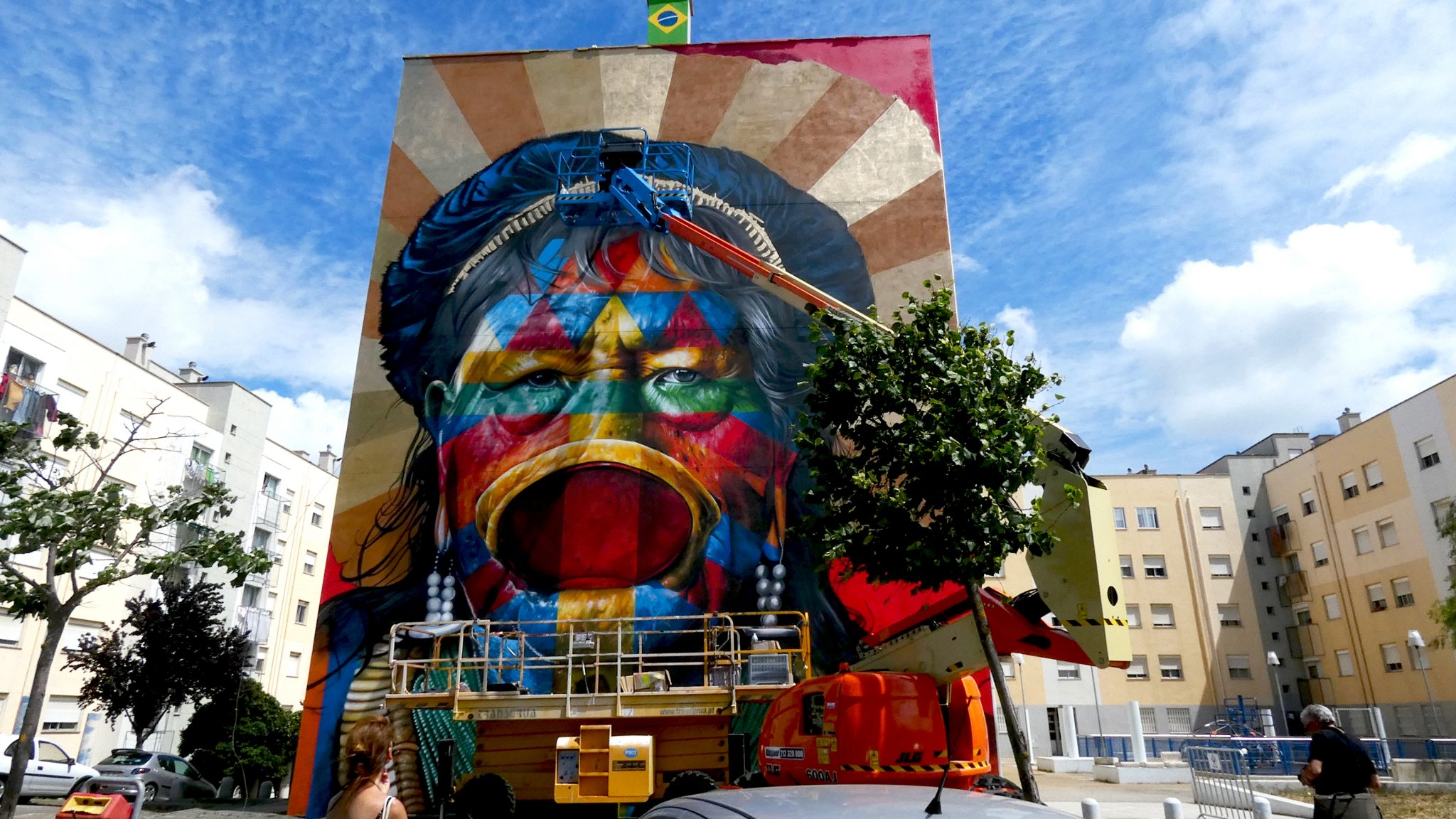 One and two years later, respectively, the work created for these festivals, as well as other nearby pieces, remains a draw for enthusiasts of urban art. Of course, coming across a piece of street art by chance is one of the most gratifying and rewarding aspects of exploring a city. But more and more, there are organised street art themed tours, especially in cities such as Lisbon that are especially known for their street art.

It was on such a tour that I recently found myself visiting the neighbourhood of Marvila for the first time. I’d signed up on a whim without specifically thinking about language, but as the tour was given in Portuguese only, it turned out to also be a perfect opportunity for me to continue to learn Portuguese in Portugal. Instructions were to meet up at the Areeiro metro station, and with our guide we walked for three and a half hours, including through the Marvila social housing estate. Our guide explained that the murals at Marvila from 2017’s urban art festival shared a theme with Lisbon’s role the same year as the Iberian Capital of Culture, which meant that all works were by Iberian or Ibero-American artists. He also emphasised, when showing us a long horizontal wall at the edge of the estate that’s an ongoing, evolving site of urban art (anyone can paint on it so it changes all the time), the idea of breaking down conceptual walls between such a neighbourhood as this (many people from more prosperous parts of the city are nervous about setting foot here, especially alone or at night) and the rest of Lisbon. I was amazed by the variety of work we saw, and it also felt good to realise that I needed no linguistic crutch. I’m fairly sure I was the only one in our group who wasn’t Portuguese, yet my efforts to learn Portuguese in Portugal have clearly borne fruit, because I understood everything our guide told us, asked questions when they occurred to me, and drifted in and out of conversations with the other people in the group as we walked from site to site. If only for this reason, if you have the confidence, I’d recommend seeking out a street art (or other themed) tour in Portuguese only. You’ll build that confidence to new levels, and you might have the opportunity to discover things that not every tourist will see (a few people in my tour group said they’d lived in Lisbon for decades and never visited the areas we saw!). And in the meantime, give us a call, send us an email, or even stop by if you’re in town; we at Portuguese Connection would love to help you with your efforts to learn Portuguese in Portugal (or virtually, via Skype), so that on your next visit here, you’ll be ready to dive right in to everything this beautiful city and country have to offer!