Museum of the Portuguese Language 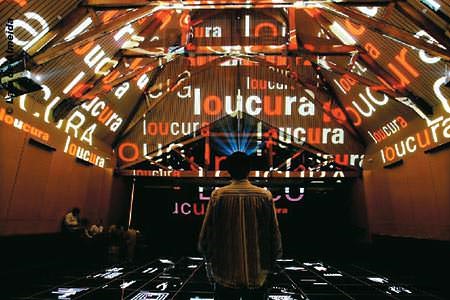 As we learned two days ago the sad news about the fire in the Estação da Luz in São Paulo, we decided to write an article about the Museum of the Portuguese Language, which was hosted inside the station and severely damage by the flames.

The museum of the Portuguese Language is the only museum in the world entirely dedicated to a language. It was inaugurated in 2006 in the Estação da Luz, one of the most important train stations of São Paulo, Brazil.

The idea was to create an interactive museum about the Portuguese language, which constitutes the heart of Brazilian culture. Indeed, certain aspects of the language can still surprise its native speakers. The project is oriented towards Portuguese speakers around the world, from Portugal to Angola, Mozambique and the islands, but especially from Brazil. It intends to draw their attention on the variety of their language, the subtleties that they might not be aware of, the history, the evolution, and the particularities.

It all started in 2002, when it was time to renovate the station. Motivated by an incentive of the Ministry of Culture, the concept of the museum was born out of the symbolic of the station. The Estação da Luz used to be the first contact that thousands of immigrants from Europe and Asia had with Brazil and the Portuguese language. It was the occasion to celebrate Brazil’s fascinating history, an immense country populated by a mix of people of different origins. The influx of non-Portuguese immigrants in Brazil had a major influence on the evolution of the language.

To emphasize the dynamic character of the language, the museum is highly interactive and combines art, technology and virtual sources. Next to the expositions, the visitors can also admire the “Árvore da Língua”, the Tree of languages. It is a three-story high sculpture, which leaves are outlines of objects, while the roots are formed by words who gave birth to the Portuguese language.

The museum is divided in several areas. The Auditorium covers the rise of human language, as one also needs to learn about the history of Language in general, to be able to understand its own. The Grand Gallery focuses on the different aspects of language related parts of the culture: music, human relations, food, values etc. It is considered one of the largest projection screens in the world. In the Word Alley, visitors can play with words, form new ones or be redirected to the etymology of the affixes they used to form already existed words. There is also a Map of Speakers of Brazil and audio documents to illustrate the differences and a space for triangular multimedia totems showing the influence that other languages have on Portuguese. Finally, the greatest Portuguese poems were assembled by literature professors and musicians in an impressive projection with sound and images to end the tour at the Plaza of the Language.

Fortunately, most of the sources used in the expositions are virtual. We can thus hope that it will reopen soon, maybe with even more creative activities to celebrate the Portuguese language. Have you visited it already?